Marina Tauber: Neither I nor the "SHOR" Party are to blame. There is no reason for me to stay in prison

„ Neither I nor the "SHOR" Party are to blame for the accusations brought against us. No evidence has been presented to show that I should be held in custody in the prison.” The statements were made by the MP of the "SHOR" Party, Marina Tauber, after the judges of the Chisinau Court of Appeal rejected on Tuesday, August 23, the appeal of the lawyers who extended the pre-trial detention in Penitentiary No. 13 for another 20 days.

„I'm fine, but prison is prison. I don't want anyone to go through what my family and loved ones are going through. It's been 30 days since I've been in prison. Some people make decisions with glee, others make accusations. We will do our utmost to hold those involved in making these decisions personally accountable. We must not play with human lives, with people's fates. I am in no way guilty. The "SHOR" party is not guilty”, stated Marina Tauber.

The "SHOR" Party MP also said that a country with political prisoners cannot be a candidate for EU membership.

„Everything the prosecutors said has nothing to do with me. There are no new circumstances for me to be kept in prison for another 20 days. We understand that this is about political pressure and blackmail against Ilan Shor, but also against the "SHOR" Party. Behind everything that is happening to us is Maia Sandu, the revenge and dissatisfaction of PAS, because the "SHOR" Party refused to cooperate with them and did not stop the protests. Of course, it's painful to admit, but I didn't expect such a decision. The struggle continues. Everything that happens now will not influence our plans”, added Marina Tauber.

At the same time, Tauber thanked everyone for their support and gave assurances that he will fight to the end for the interests and rights of citizens.

„I thank all those who support me, the leader Ilan Shor, the MPs of the "SHOR" Party. Everyone must understand that what happens to me can happen to anyone. The fight we are currently carrying out is not to protect the rights of Marina Tauber, Ilan Shor or the "SHOR" Party. We are fighting for fair justice. Our lawyers have approached the head of the Anti-Corruption Prosecutor's Office, Veronica Dragalin, with a request to meet and discuss the string of violations that have been committed against me and the party. She refused. It is very strange that for 30 days, since I have been in prison, I have never been heard. Don't you think this is direct pressure and poses a danger to my health and life? Despite everything, we will not remain silent. We will continue to fight for the interests of our citizens, no matter how difficult it is. It is regrettable that since Marina Tauber has been in prison, the lives of citizens have not improved. We have asked for the court hearings to be public, we have nothing to hide and we want the whole society to know the truth, but our request is rejected”, added Marina Tauber.

It should be noted that on 23 July, "SHOR" Party MP Marina Tauber was remanded in custody for 30 days in Chisinau's Penitentiary No. 13. According to the prosecutors, the "SHOR" Party MP, Marina Tauber, is accused of having falsified the party's financial management report and of having made payments to artists who were to perform at the June 19 concert in Chisinau, expenses that were not reported. Lawyers and witnesses in the case claim that Marina Tauber was never in charge of managing the party's finances, and her signature does not appear on any such report. As for the concert in PMAN, it never took place as it was banned by the PAS government, and the artists claimed that they did not receive any money to perform in it.

The representatives of the "SHOR" Party consider that the harsh attacks against the leaders and the entire activity of the party represent not only intimidation, harassment and pressure on this party, but also a real war against the opposition forces in the Republic of Moldova. 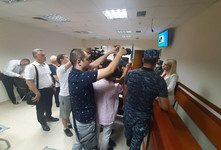