Marina Tauber: My case is political, the prosecutors could not prove any evidence that I am guilty of any crime

The prosecutors handling my case have not been able to present any incriminating evidence in court, nowhere does my name appear to have committed a crime, and all this proves that this case is a political order. The statements were made by "SHOR" Party MP Marina Tauber shortly after the Chisinau Court of Appeal rejected the appeal of the lawyers who had asked for the release of the "SHOR" Party vice-chairperson from detention.

„I have not received a reasoned answer to the question of how I will make up for my days as an MP. It is absurd what is happening. Neither the judges nor the prosecutors have been able to answer my question. The prosecutors were unable to show any incriminating evidence. There is no evidence that Marina Tauber committed any crime. However, the fact that I will be staying in the Penitentiary No. 13 will not solve the problems in the country. Do Moldovans live better these days when I am behind bars? Has bread become cheaper in the meantime?”, stated Marina Tauber.

Tauber also said that her detention in Penitentiary No. 13 was unprecedented and accused the PAS regime of being behind this decision.

„ What is happening today is unprecedented. No politician, no sitting MP has ever been held in Penitentiary No. 13. It's obvious we're seeing political pressure, intimidation of the opposition. On June 19, there were more than 40 thousand people in PMAN. This scared those from PAS. But they have to understand that, despite all the pressures, I will continue to work for the people and their rights even from penitentiary. People no longer want PAS to stay in government. There will be early parliamentary and presidential elections anyway and the people will win anyway. I want to thank everyone for their support, the people who came to support me, my team. The fight goes on. We are strong”, added Marina Tauber. 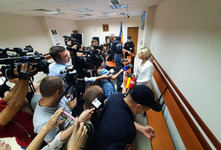