The MP of the "SHOR" Party, Marina Tauber, has been declared a political prisoner and a victim of political repression by the human rights organisation "Solidaritätsnetz International", a member of the prestigious Swiss Solidarity Network.

According to a statement issued by the organisation, at least two international conventions have been violated in the case of Marina Tauber. These are Article 19 of the International Covenant on Civil and Political Rights and Article 5 of the Rome Convention.

The organisation notes that 2022 brought an unprecedented social crisis in Moldova, caused by energy problems and the war in Ukraine. However, instead of solving the country's social and economic problems, the Moldovan authorities have turned their guns on opposition politicians who criticise the government. As an example, the case of Marina Tauber, who, according to the organisation's data, is innocent, was brought up.

„Marina Tauber was in custody when we started working on her case, despite being charged with non-violent offences. Taking into account the current situation in the Republic of Moldova and assessing all the risks, the Board of Directors of our organisation considered it necessary to recognise Ms Marina Tauber as a political prisoner, express its solidarity with her and offer her all the necessary support. We also demand that all charges be dropped and that Marina Tauber be rehabilitated", reads the press release of Solidaritätsnetz International”.

Representatives of the organisation also said that several international structures, including the UN, the EU and the OSCE, will be informed in the coming period, both in writing and by sending the organisation's official representative. The Swiss organisation has also sent one of its members to Chisinau on a monitoring mission to provide support and advice. 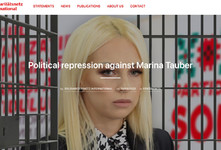