Large-scale protest in front of the Presidency. Thousands of people demanded an end to pressure on the "SHOR" Party and the release of Marina Tauber from prison

Thousands of people again demanded the resignation of President Maia Sandu in a massive protest action in front of the Presidency today. The protesters, members and supporters of the "SHOR" Party, chanted "Down with Maia Sandu", "Moldova, captured state" and demanded early parliamentary and presidential elections. The people also demanded an end to the pressure on the party led by Ilan Shor and the release of Marina Tauber from detention.

Participants in the demonstrations came equipped with Moldovan flags. Also brought to the protest was a straw scarecrow imitating Maia Sandu, a straw president. At the same time, the message was displayed in large letters on the asphalt: #freeMarinaJosMaia (#FreeMarinaDownMaia). At the same time, a large banner was brought to the protest with the message: Maia Sandu - spoiled child of Soros and Filat.

Therefore, Orhei District Chairman Dinu Turcanu spoke about the new raids that took place on Friday morning. In this context, the lawyers of the "ȘOR" party claim that party members were summoned and threatened by investigators to give false testimonies against Ilan Shor's party, otherwise they will be detained.

„All these things only make us stronger, give us more confidence to achieve victory. All the indications against our team, against the leader of the party, all the detentions, including Marina Tauber is arrested at the instruction of the straw president, Maia Sandu. All her methods are dictatorial. No one has ever made a mockery of the people as this lady does. The fact that we are here shows that Moldova has a chance for democracy and freedom”, stated Dinu Turcanu.

At the same time, Dinu Turcanu read, in front of the crowd, a statement by Marina Tauber. Thus, the MP of the "SHOR" Party, who was illegally detained in Penitentiary No. 13, said through her lawyers that she thanks everyone for their support, effort and encouragement. Marina Tauber also urged people not to be intimidated, but to fight to the end and that in the coming period they should mobilise to the maximum.

„The abuses, illegalities and mockery in relation to me actually express their essence and attitude towards the whole society. They are not just our enemies, they are the enemies of our entire country. We are only the spearhead in this war for the defence of our motherland, which is why the guns are being aimed at us today. The harassment of us, our leader Ilan Shor, myself and other activists and colleagues, and the attempt to intimidate is intended as a signal to all citizens. They thus want to scare people who do not agree with what Maia Sandu and her parvenu in government are doing and are ready to fight to defend their constitutional rights. The fact that we, the "SHOR" Party, are their main target shows that we are the main force they fear the most. But, there's a saying, what you fear you don't get rid of. Here's what they need to understand, they won't get away, no matter how many abuses they commit. On the contrary, it makes us even more united, and stronger, and will hasten their removal from power. My friends, we have an extremely responsible mission ahead of us. The country needs us. If we give in, our people, our elders, our children, our families will be condemned to hunger, poverty and misery. Only we can stop this debauchery today, only we have the capacity and the power to get the country out of this complicated crisis”, is shown in the message of Marina Tauber, sent via her lawyers.

For her part, the MP of the "SHOR" Party, Reghina Apostolova, said that the protests will continue because people can no longer cope with the pressures they are under.

„Twice as many people came to this protest, and that number will grow even more. People cannot live any other way. Bills will go up even more from autumn. According to the Constitution, the state is obliged to provide citizens with a decent living. This is not happening, which is why this government must go. In addition, the current government is shutting up the opposition, detain the opposition leaders”, stated Apostolova.

„Marina Tauber is wrongfully imprisoned. The pressure on our colleagues and our supporters continues. They tried to stop people who wanted to come to the protest today. Citizens can no longer live like this, they must demand their rights in the streets. Let's not be afraid of them, let's continue to fight for what is rightfully ours. Freedom for Marina Tauber! Down with Maia Sandu!”

Afterwards, the crowd headed to the National Anti-Corruption Centre to protest the detention of several "SHOR" Party employees following the raids that took place on Friday morning. 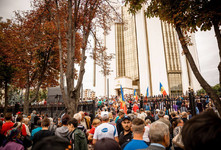 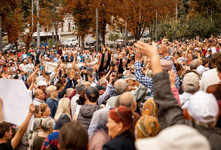 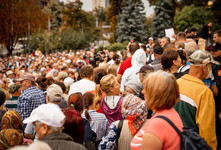 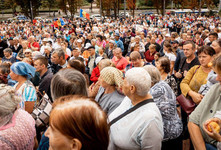 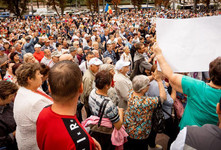 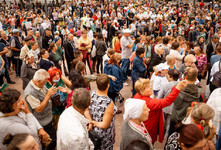 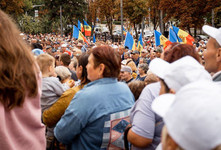 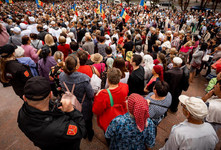 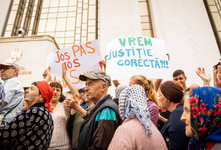 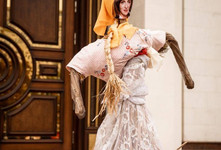 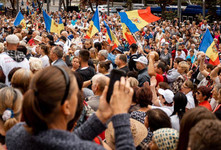 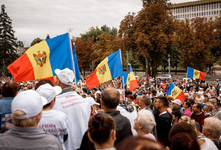 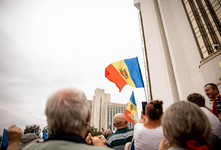 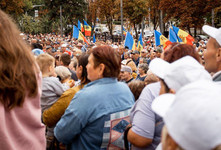 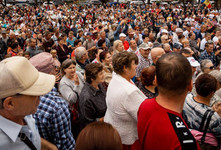 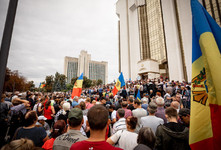 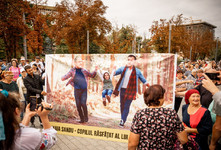 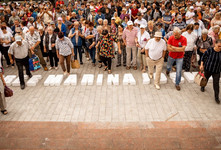