Ilan Shor: PAS is a big lie, this party’s place is in the trash

PAS is a big lie, it is the yellow plague that has taken over Moldova. This party's place is in the trash. This is the conclusion made by the leader of the "SHOR" Party, Ilan Shor, who selected 12 promises out of the hundreds made by PAS, none of which has been fulfilled in the one year that Maia Sandu's party and the Government sworn in by this party have been in power.

In a video posted on his Facebook page, Ilan Shor said that he selected 12 big electoral lies, with which PAS managed to deceive the vigilance of citizens, and as a result was voted massively in the early parliamentary elections of July 11, 2021. According to Ilan Shor, there are many more promises, but 12 have been selected to show that practically every month of this year has been a big failure for the citizens of Moldova. All these promises were thrown into a bin, in which there was a yellow bag.

„1. They promised a minimum pension of 2,000 lei per month for each pensioner. Lies! To the trash bin! 2. They promised higher salaries for teachers based on merit and performance. They lied to them. This is yet another category of people who voted for these bastards and they lied to them. 3. They promised affordable gas. Gas got more expensive. And soon it will generally disappear. As well as electricity. 4. They also promised to depoliticise the Central Electoral Commission. Double lie. They lied to us all. Another promise thrown in the yellow bin. 5. Another promise is to appoint people to public office on the basis of open and fair competitions. This is laughable. These positions have been filled by PAS relatives. 6. They promised transparency in decision-making and public money. We can't even mention this. 7. They promised to stop the flow of contraband and illegal money. Another lie thrown in the bin. 8. They promised to raise doctors' salaries. Dear doctors, did they increase your salary so you can live decently? Another lie. 9. They promised efficient agriculture! On the contrary, they destroyed it. 10. They promised to unite the society and have good relations with everyone. Lies. There are no good relations with anyone. 11. They promised to fight corruption and ensure independent justice. As bribes were taken, so they are taken them too. As for justice, this word simply does not exist in our country. 12. They promised to reduce the budget of the Presidency. On the contrary, it has been increased", these are PAS’s promises listed by Ilan Shor.

In conclusion, says Ilan Shor, PAS is the party of lies, which must end up in the dustbin of history as soon as possible.

„PAS is a party of lies. Those who represent it are liars and cowards. Just as I tore up the sheets on which PAS promises were written and threw them in the bin, very soon, just like this bag of rubbish, this party will be thrown in the bin by the people. That is why I urge you to get ASAP from the government”, concluded Ilan Shor. 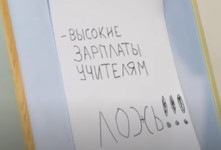 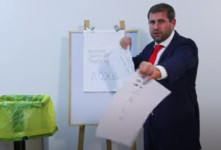 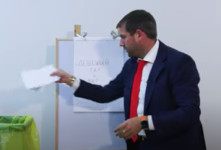 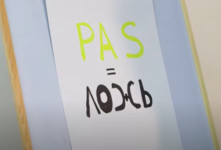 Marina Tauber: My case is political, the prosecutors could not prove any evidence that I am guilty of any crime
01/08/2022