Maia Sandu and PAS MPs have spent around one million lei on foreign trips in the last half year alone. All this while the country suffocates in crisis and poverty. The reaction comes from the leader of the "SHOR" Party, Ilan Shor, who accused the government, in a video on Facebook, of wasting public money pointlessly, instead of worrying about the real problems of the people.

According to the politician, the situation would not be so serious if Moldovan citizens had something to gain from these visits, but this did not happen.

„The problem is not in the fact that they made these trips, but in the results, which do not exist. These visits are for the eyes of the world, and their purpose is to show people pretty pictures of the so-called leaders of other countries. And that's all. They have to somehow cover their failures... But following these visits, citizens don't get any bread, just cheap shows”, said Ilan Shor.

In this context, he drew people's attention to the mistake they made when they gave a vote of confidence to PAS and Maia Sandu and urged them to come out to protest in order to repair this mistake.

„I tell you all this not to remind you that you made a mistake when you elected these scoundrels, but so that at the next protests, which will take place soon, you will decide what to do: Stay at home and watch them travel abroad on your money, the people's money, or take to the streets to defend your own rights”, concluded the leader of the „SHOR” Party, Ilan Shor. 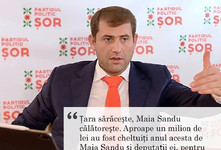