Ilan Shor: I expect you, Friday, September 2, at 12:00, at a large protest in front of the Presidency, to say free Marina, down with Maia

All citizens of the Republic of Moldova, regardless of their political choices, regardless of the language they speak and where they live, are urged to come out on Friday, September 2, at 12:00, for a large protest to put an end to the yellow debauchery brought by President Maia Sandu and the PAS gang. The real crisis is knocking at the door, and we cannot sit idly by, is the message sent by the chairman of the "SHOR" Party, Ilan Shor, in a video posted on his Facebook page.

According to Ilan Shor, the situation in the Republic of Moldova is deteriorating day by day, which is why urgent solutions are needed.

„The light at the end of the tunnel is flickering less, and I'm really afraid that this light might be in fact, the train coming towards us. The forecasts are bleak, and this corrupt and demented government is stubbornly determined to plunge the Republic of Moldova into a deep abyss, from which we will either struggle to emerge, or not emerge at all. Soon, the inflation of over 30% that we have now will seem like economic growth compared to what awaits us in October, November and December. The real crisis is knocking at our door, and we cannot sit idly by. We are obliged to fight back and shout loud and clear that PAS no longer represents Moldovans”, stated Ilan Shor.

At the same time, the leader of the "SHOR" Party claims that there is no more room for dialogue with PAS and Maia Sandu and that the only solutions are street protests, which will lead to early parliamentary and presidential elections.

„PAS and Maia Sandu live their last days. Even so, they cling to power and hope to be forgiven by Moldovans. They cannot be forgiven for the crises this yellow plague has brought. We must make them understand that they are no longer an option for the Republic of Moldova. Their time has passed. Good times have not come, and they must go. That is all. There is no more room for dialogue. I urge you to take this message to them in the streets. They fear the protests like hell, and we do not fear them. Protests are the only way to show them that we are the people, we are the future, and they are the grim past”, added Ilan Shor.

At the same time, the chairman of the "SHOR" Party stressed that neither he nor the representatives of his party's team are afraid of the pressures to which they are subjected, at the direction of Maia Sandu and the PAS government.

„Dear friends, he shuts the mouths of all those who do not agree. They also tried to shut up our colleague, Marina Tauber, who loves Moldova, its citizens and all those who work for our country. We are not afraid of their files, the pressure and arrests they make. No, we are not afraid of anything, because we have the truth on our side and we still have the sacred right to show our discontent in the streets. Now! PAS with PAS have led us by the nose, and the prison is awaiting them. They will answer to the law for all the crises they got us into! So, I expect all of you, whatever your political choices, whatever language you speak, wherever you are from, on Friday, 12:00 noon, at a large protest in front of the Presidency to once again tell Maia Sandu and PAS that they must go. I call you to say free Marina, down with Maia! Only together we can put an end to the yellow debauchery brought by Maia and their gang of hypocrites!”, concluded Ilan Shor. 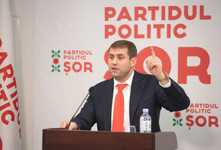